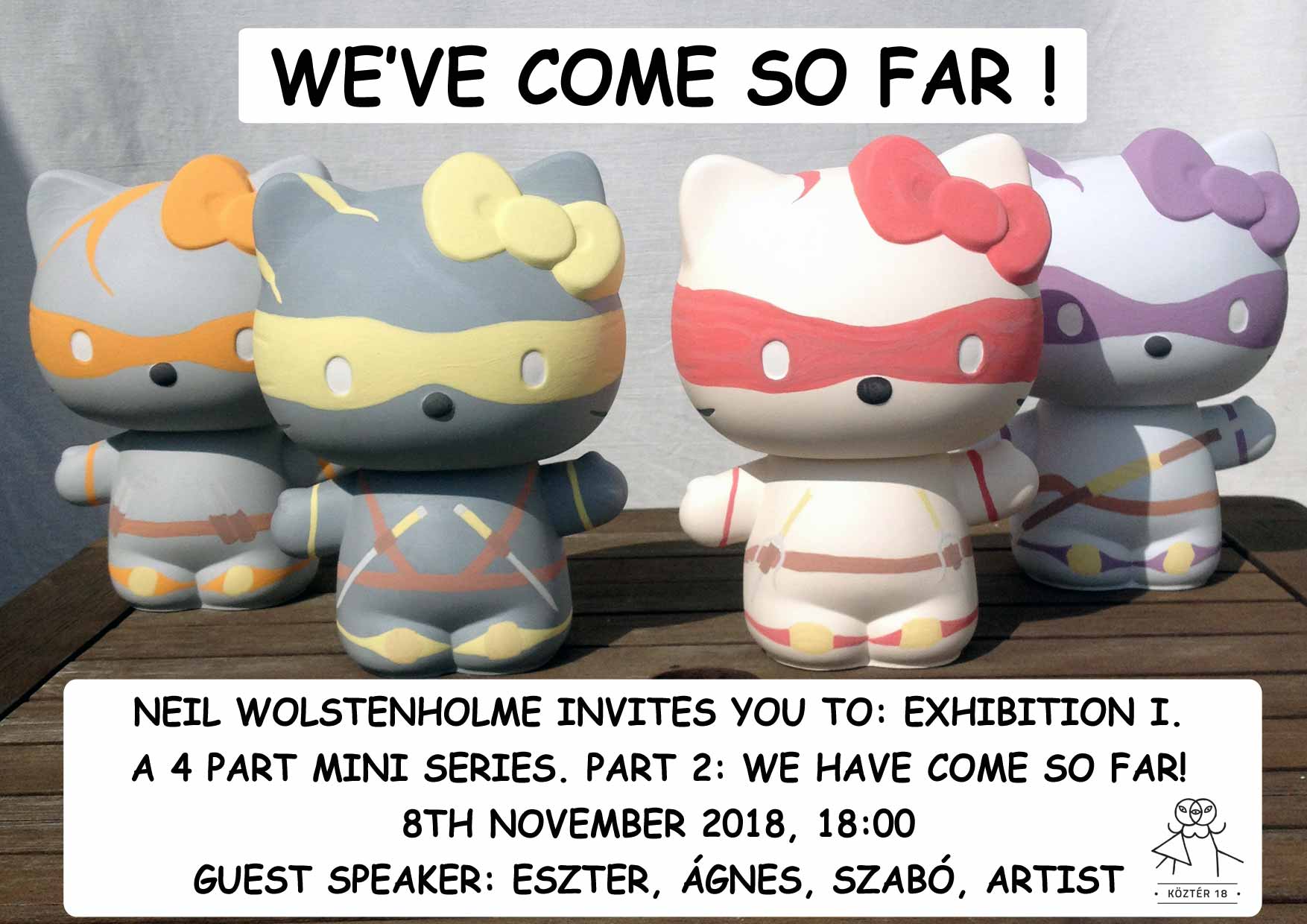 From the original creativity in the African Blombos Caves to our high pop-culture I ask myself: How Far We've Come?

HELLO KITTY! HELLO WORLD!
1. Map: One of the first maps that depicts the world is the Mappa Mundi, which was made in 1280 and kept at Hereford cathedral, England. All the familiar elements of that time are on it. 420 cities, 15 biblical events, 33 animals and plants, 32 people, 5 mythological scenes. That's all they knew or wanted to depict of world. At the top of the map we can see Jesus with his halo surrounding his head, son of the divine (the god). At that time of humanity it is well before the discoveries which determine our worldview, at that time are the elements of reality and beliefs.
It was a several hundred years ago, the different today is we make maps with reality not belief. The picture behind me shows the currently accepted map containing only geographic information. For example, its creators did not consider it important for Jesus to appear on it, or even Mohammed or Buddha. We see only geographic content, and we can complement with our information with what we consider important. The inner map of everyone is there. We know where it comes from the pepper, tomato and potato or the porcelain that reveals the commercial routs of this age, and the ways from east to the west, and vice versa.

2. Porcelain: Who works with porcelain, "it is not a map of the landscape" for them, but they are thinking of real adventures and dangerous waters. The porcelain made in at the Far East first. (Lines: Korea- China- Goa_ Portugal_Holland, China to England, Sweden and France, and even more.) Throughout the sixteenth century, all of Europe was searching for the recipe of porcelain material because the Chinese were unable to meet their needs and shipments were periodically shut down or the ships sunken on the seas. The most varied versions were born before finally the material was created in the Meissen factory of Europe. Before this, the British, the French and the Swedish followed the Portuguese and the Dutch, and brought more than 100 million china porcelain objects to Europe in-between the XVI-XVIII, century. It's a big number as if we were talking about music downloads or views on youtube nowadays.

3. The Stars in the portrayal of Humanity: One of the oldest 3-dimensional human figures is the Venus of Willendorf, which became a star in the world as a sign of our past. This position reached out further than the reputation of Pyramids. With her disability, she became more involved in the hearts of the people. More than the Nike of Samothrace or the statues of other monarchs. We know a lot of fictive or real figures from every historical age, who come to our help in life, Small statuettes and trinkets that helped overcome difficult times. Human weaknesses were already supported by fictitious beings from the beginning, beings who possessed the knowledge of what is missing from the small human life. We call on them all of the time to solve the our various problems, or their stories were examples, or even mirrors to the people. In the XX. century, Mickey Mouse and Donald Duck where the first figures, who did not only do everything, which happened to people, but they were the first in the cartoon genre. The superheroes appearing in comics with their abilities, they seem like gods, to bridge the distance that is not only a geographic issue, but a matter of time and space continuum.
4. Hello Kitty: The full name of Kitty is Kitty White. She is a Japanese girl with an English name, because the english names were very fashionable in Japan, at the 70's. Interestingly this is a visual translation mistake (Cat or Girl). It has already occurred in a similar situation in the porcelain history, when the legendary chrysanthemum buds were simply considered to be an onion in Europe. Just like Kitty, by the name everybody thought, she is a cat. Kitty is, of course, one of the youngest stars in the world of "totems". She was born in 1974. Designed by Júko Simizu. The characteristic of our iconography is the bow that it always wears on its left ear and she has no mouth. The mouthless character in this case is not a limitation or disability, but rather the freedom, the exemption from language use. The possibility of living anywhere and anytime. Neil Wolstenholme used this effect, when he expands the figure of Kitty White in space and time. The porcelain material, and the adventurous history of porcelain also help him in this. We can honour the porcelain material as a totem in itself, which takes on different shapes at every historical age. And now the porcelain changes to Hello Kitty. We can see a multilayer approach to our own historical atlas by Neil Wolstenholme, where the artist and creator shows to us his most personal inner map. Now he is sharing this mythology, for millions of fans, of the eastern and western cultures.

If we look at the map, we can not only see the generally accepted and unalterable geographical layout, but just the opposite. That we are able to cross all these borders completely and overwrite, and redraw the world map.