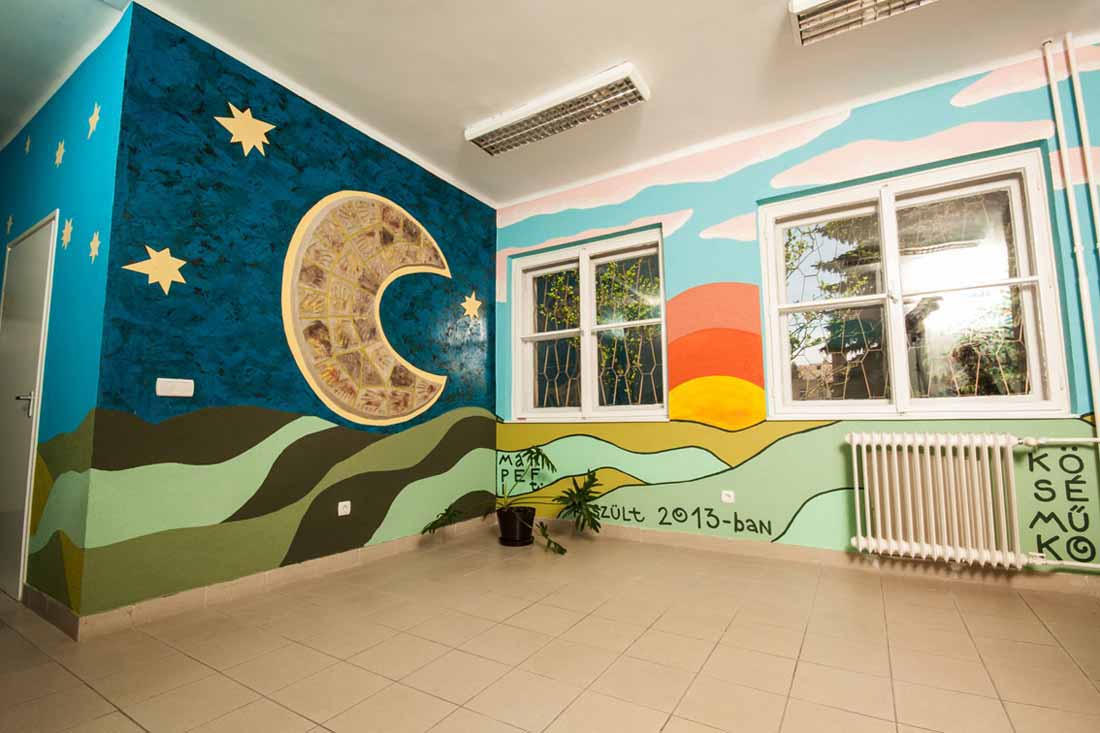 Mapei Kft, who assisted the community-art project earlier in Budaörs, were successfully encouraged to advertise the 2012 tender with the title “More colourful, More lovable”, for which educational institutions applied, so as to make the institutions and surroundings for communal art projects more colourful, more livable, more friendly. There were numerous applications for the tender. The jury chose the Vas County Regional Child Protection Service Children’s Home. Mapei Kft asked Kinga Ráthonyi and Neil Wolstenholme to design the basic conception of the work in the actual location, pull together the community creative process, and lead the craft work and the studio workshop. The designer couple in the planning process suggested the Sándor Weöres quote above as a motto for the institute, from which followed the four times of the day: sunrise, noon, sunset, night sketched out between the earth and the sky. Many took part in the busy work of several weekends: the artist couple, the Mapei technicians, Tamás Iglói’s tiling team, managers and workers of the institute, and naturally the children.

The competition sponsors Mapei Kft asked that exclusively Mapei materials should be used. This condition, that normal ceramic materials should not be used, was a difficult and exciting challenge to the designers. Nevertheless, the artists had before this had some experience of the fantastic possibilities given by the broad spectrum of colours available for types of coloured mortar like this, for example they knew of mortar technique giving an antique effect or layered special effects. The experiences acquired here would be used on a broad range of numerous occasions in their later works.

After everyone worked out the plan – four times of the day on four walls – the most exciting challenge was preparing a huge Moon and Sun out of hand-breadth cement segments. Making regular frame moulds out of polystyrene (not out of wood), children in residence and workers in the institute pressed their palms into the special Mapei cement glue after it was freshly poured in the moulds. on these shutters. The special cement that hardens in under half an hour sped up the work wonderfully. Traditional ceramic materials and techniques would have required a process of several weeks with drying and firing times, and would have needed more clay and much higher costs due to firing. Mapei’s special glues, cements, pointing materials shortened the process as well as helping to create its unique look. The process of creation was served by specially researched materials and substances which since then have been regularly used by the artists in their work, and the use of these contemporary materials has also been introduced into the KözTér18 OKJ ceramic training course curriculums. The firm Mapei Kft was highly impressed with the artwork that came into being, not thinking that inside their materials was hidden the possibility of such artistic creation. After the specialist building work was completed the artists worked with the children painting freestyle wall murals on designated areas.