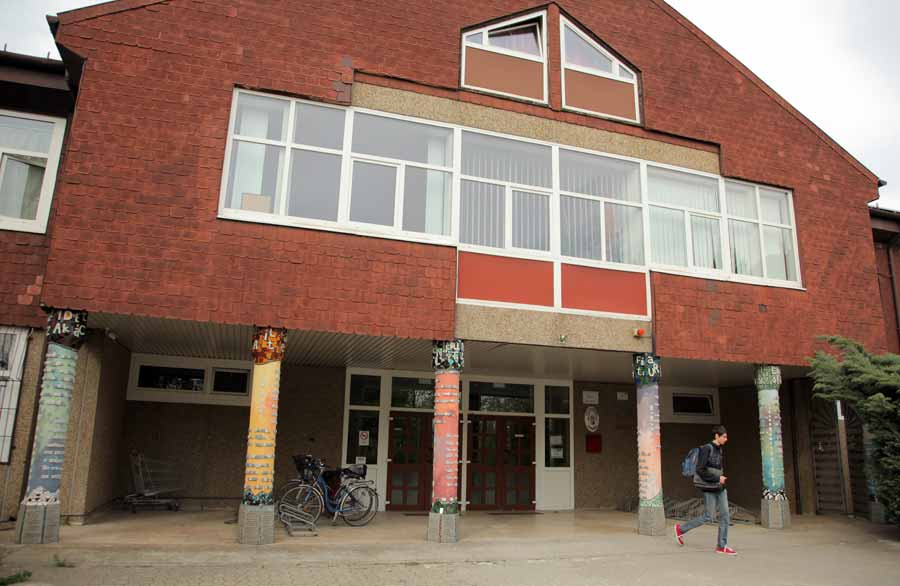 The preparation of the grammar-school columns was a genuine communal work of art. More than six hundred people altogether helped out in the shared studio space. Previous students, those currently studying there, one-time and current teachers, celebrities of the city who studied here, the mayor and local council workers all took part in the work. On the columns are texts chosen by contemporary writers from their own lifeworks. A quote from Gyula Illyés chosen by nationally-known literature teacher János Márton extends across the head of the columns. In 2015 the institution celebrated the passing of its 50th anniversary, and the creation of this artwork was connected to one of the phases of that anniversary commemoration.

The six columns were made with individual moulded cement tiles. Each tile had been prepared so every participant could print their name which leaves an imprint of the overall co-operation. On the trunks of the columns a fine coloured mortar covering combines with porcelain elements, while the capitals of the columns formed from porcelain segments and mosaic tiles. In a similar spirit to the “Illyés Gate” and the “Illyés roundabout” here too the main idea was the presentation of the ethos of the institution. Above the columns on the building continues the form of a small tympanum. On the tympanums of serious buildings (such as Greek temples, classicist museums) above rows of columns there are often serious visual and verbal messages. In this case the design of the columns brought together verbal and visual statements. The man the school is named after is a significant figure in the history of literature. So that the message of the columns should be 21st-century, and also connected to the institution, three figures from three generations of Hungarian contemporary literature were invited to work together with the makers of the artwork. István Kemény (the Grammar School’s ‘Everlasting Student’), Péter Závada (a one-time teacher at the school), and Zsófi Kemény. The three creators represented three age groups and three different styles, while within their age groups the work of all three is of exceptional quality. Their task with the school entrance was to choose for posterity a message from their own earlier writings. Alongside the three contemporary creators, János Márton, the retired literature teacher, chose a quote from Gyula Illyés. The text obtained this way served as the basis for further communal artistic work. In the communal workshops the school students, teachers, and whoever was interested from outside was able to take part in the further design of the visual placing of the text, then in the construction of the moulded porcelain and cement components for the columns. Students on the new OKJ ceramic training course and the PTE ceramic course played an especially important role in the work. András Visky, playwright and dramaturg, opened the Illyés Columns on November 5th, 2015.

Of special interest in the work is the cements, glues, other equipment used – thanks to the help of the Budaörs firm Mapei Kft – which have creative possibilities largely unknown in the applied arts. The creators also obtained building-ceramic materials from the Pécs-based Zsolnay Porcelain Factory, and gorgeous glass mosaic tiles from the Italian SICIS mosaic firm. Thanks to these firms above, both intellectually and technically an unparalleled visual community artwork came into being in Budaörs, at the entrance of the Illyés Gyula Grammar School.