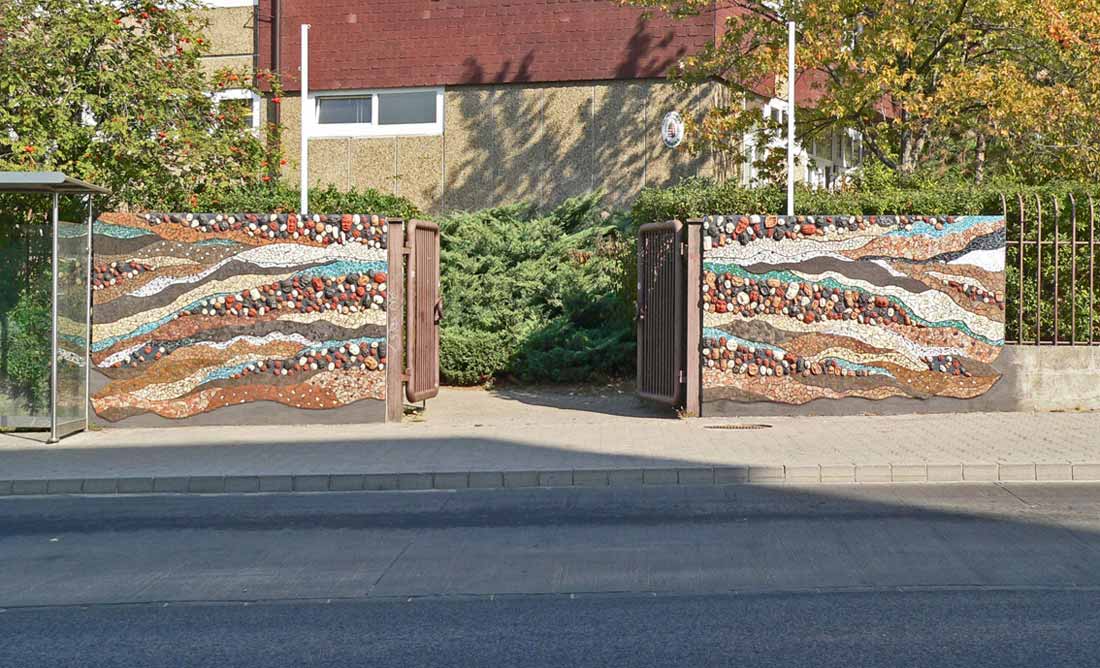 The held out, inviting hand is a suitable image for the accepting spirit of the school entrance. This is a community which keeps together: out of the many different individual people of Illyés these faces come together from coloured clay, made by the students themselves. More than 200 unique self-portraits and portrayals formed the Illyés gate. The community artwork had two decisive characteristics, first that the creation should use a significant quantity of recycled materials such as broken tiles and mosaic remains, second that this was the first time when it was possible to follow and indeed join in with the creation of a community artwork on Facebook.
Within the structure of the communal art project a combination of ceramic relief and mosaic was used to create the Budaörs Gyula Illyés Grammar School and KSZKI entrance. Taking part in the creation were 120 grammar-school pupils, some OKJ-course students who’d previously studied there, and more than 20 teachers. The visual representation of the Illyés culture influences the “Illyés”-ness of the surroundings. It was essential to give shape to a connection between the main entrance and the street which would indicate: whoever passes through here, whoever really steps through this gateway, now enters into another world – into Illyés territory. For the essence of this world called for a designed mix of ceramic relief and mosaic to be conveyed in the entrance gate.
All sorts of motives called for a multifaceted community to be represented, for which every unique member could take a role in the entirety, in the same way as each segment of ceramic relief and mosaic came together in combination. Simple clay blocks were taken by participants and returned as illustrated forms to symbolise the openness of the institution “This never happened before in Budaörs. The artists have dedicated a school, a clinic, a church, a town hall, but never yet a gateway. Never mind one which is the first and only shining example of community art. This creation of Kinga Ráthonyi and Neil Wolstenholme carries the handiwork of 200 identifiable people, forming images and figures of themselves. More, since for 20 years we have looked at this ugly grey block of concrete and then here came two contributors, and with ‘several’ changes made it into something it should have always been: the gate.” The Ybl-Award-winning architect and MOME instructor Zsófia Csomay, with these words officially opened the gate on June 11th 2011.